The International Olive Oil Exhibition celebrates its fifth edition next 2 and 3 March 2016, with significant participation of mills producing countries, as well as buyers from around the world. The wooe serving five years Kike Pineiro, co-owner of Restaurant A Horta d’Obradoiro, in front of the Gourmet Area. In this space, the World Meeting of Olive Oil pays special attention to olive oil in gastronomy.

During the four previous editions, Galician chef has explored different techniques, themes and products through which to demonstrate the many applications that have olive oil in gastronomy.

On this special occasion, in honor of the fifth anniversary of the meeting, Kike Piñeiro has developed a menu that oil will capture the attention of diners through the five senses.

The menu, “AOVE with the 5 senses”, offers a sensory journey in five tapas where you can feel and enjoy olive oil, highlighting each of them a concrete sense. The view will be trapped by a striking marine assembly. Touch train their abilities with small morsels that must be caught with your hands. The hearing will be appealed before trying a preparation of marinated tuna, but also when you are tasting. The smell will be stimulated with intense aromas of chocolate and smoke oil. And finally, the taste will test your skills with a lid which container is opaque to eliminate visual distractions and try to guess its components.

A challenge to enjoy olive oil through the five senses. The World Olive Oil Exhibition Kike has had Piñeiro for Gourmet Area since its first edition. He also runs the Gourmet Area of ​​the World Bulk Wine Exhibition in Amsterdam. And a year is co-owner with Eloy Cancela Restaurant A Horta d’Obradoiro in Santiago de Compostela (Spain).

The WOOE also offers a space dedicated to products that use olive oil as an ingredient, from cosmetics to canned or dressings. Among the products this year are canned Soler Romero, Canned Daporta or Paco Lafuente; or aromatic oil Oils Limited; the omelette prepared Maja Oil; Panettone of Sabors.cat; Mother made bread bread; Oleocampo cosmetics, Jacoliva or Chinata; Olive extracts Natac; or woodwork olive Los Oliveiros. Thus a total of fifty companies that exhibited more than 150 products.

The International Olive Oil Gathering celebrates its fifth edition next 2 and 3 March 2016, with significant participation of mills producing countries, as well as buyers from around the world.

This is a key trade event for buyers, producers and packers entire sector in which the most prestigious brands in the industry AOVE have a strong presence. The commitment olive oil in some emerging countries is also an opportunity for the packager sector position on them through an international event like the wooe.
In its last edition, the World Olive Oil Exhibition brought together more than 100 mills and experienced a 25% growth in visitors from 38 countries. 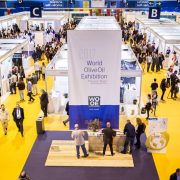 Latin America and the Caribbean in the fight against hunger