Authorities of the European Parliament, the MAGRAMA and regions and representatives of farmers, the food industry and distribution have placed the focus of the debate on agricultural policy and innovation in the consumer, during the course of the last conference “Agrícola Café” of year, sponsored by BBVA, ENESA and Massey Ferguson. The other attractions of the meeting has resulted in the analysis of the CAP from the perspective of consumption, shows different cases of success in the agrifood value chain and call for all actors have forged a consensus to develop the code good business practices. The day was moderated by the journalist César Marcos Cabañas.

“For Editorial Agrícola Española is important to bring useful information not only to the farmers but also to the rest of links of the food chain, said Jesus Lopez Colmer, executive director at the opening of the conference “Agrícola Café”. “By the opportunities for debate and reflection on days like this, we undertake actions in schools and primary schools to tell how the primary sector works in our country.”

In collaboration with the Ministry of Agriculture, Food and Environment (MAGRAMA), the Spanish Association of Distributors Supermarkets and Supermarkets (ASEDAS) Designation of Origin Estepa, the Interalimentario Forum, the Interprofessional Porcine Layer Blanca (INTERPORC) and MAKRO, Editorial Agrícola Española has organized the “Agrícola Café Conference: Value chains in a global market In Search of Excellence”, which took place at the headquarters of the Ministry of Agriculture, Food and Environment and has been sponsored BBVA, ENESA and Massey Ferguson.

“We must pass on to consumers the Common Agricultural Policy (CAP) is not only agriculture is food, because it makes you a participant in the security, traceability and decides what to buy”, he has urged Fernando Miranda, CEO of Productions Agricultural Markets and the Ministry of Agriculture, Food and Environment (MAGRAMA). Regarding the current CAP reform, Miranda said it remains unknown how it will be this first year of implementation

and recognized in the first table discussion of the day that “will see pressures to start its review in 2017, but the foundations for the future of Spanish agriculture are guaranteed until 2020, so we encourage the sector to engage in looking at the market.”

This “check” will be a budget review, as Tomas Garcia Azcarate, one of the great experts in European agricultural policy and has come to represent the IEGD-CSIC (Madrid). “The key issues after 2020 will be those of the food chain, and an agricultural policy in a free market environment where competition issues will be a key,” he stated.

For his part, Francisco Martinez Arroyo, Minister of Agriculture, Environment and Rural Development Castilla-La Mancha, has emphasized that the CAP is used to compensate for what the consumer is willing to pay and “at the end, we paid a lot to through it, so it is also necessary that the CAP is geared to the consumer.”
MEP of the European People’s Party, Esther Herranz, stressed that “CAP can not fail to be a shelter for farmers” and has launched a reflection on the price to be paid for food products if there were available funds.

Profitability of farmers from innovation and risk management

On the one hand, in the second panel discussion, Enrique Fernández-Marcote, brand manager for Massey Ferguson, stressed that this firm of agricultural machinery “has a clear commitment to the generational change of agricultural producers, so directs its actions Looking ahead to assess the different demands and a clear commitment by the sum of product, service and access to information “.

For BBVA, Jorge Rueda Esteban, SME Segment supply agricultural value, has exposed the most interesting clues to improve the profitability of farms with the help of financial institutions, “with financial solutions available for every link in the food chain : farmers, cooperatives, industry and distribution. ”

“Agricultural insurance is an instrument that will more and is an element, if it is not mitigation, yes it is to adapt to climate change,” argued the director of ENESA, José María García de Francisco, still insist in the belief that insurance is a key tool that ensures the income of farmers in the risk management activity.

Success stories within the value chain

Beatriz Garcia, Director of Communication and Sustainability MAKRO, explained in Ecuador of the conference “Agricultural Café” project details of shared social responsibility “AlmaMakro”, “a program that cares about helping small producers of quality where the important thing is they, the soul behind, and to give them a future. They are unique products, buy them now, when available, or just not have it at another time. ”

Then Moisés Caballero Páez, secretary of the DO Estepa, whose “main force is to have a product, people and territory to defend,” he added, “some 4,500 families, which is the most important value of Appellations of Origin. Where appropriate, the DO Extra Virgin Olive Oils are “as Infantry School of oil, because we have programs for school”.

For Victor Yuste Jordan, CEO of Foro Interalimentario, “the consumer is the boss, the center of all our activity, but each link must be sustainable by itself: producers, industry and distribution.” The share of power in the food chain as a whole is much higher than the share held by each link and “must promote transparency of knowledge, R & D transverse to the end, innovation can be implemented,” he said.

INTERPORC work is the generic promotion, “but we also sell Mark Spain, with actions including the Cervantes Institute”, has told Alberto Herranz Herranz, director of INTERPORC which sells meat products in more than 120 countries, including China , Japan, Philippines, Vietnam, Mexico and Colombia, destinations where they want to boost exports of over 488 companies in the pig sector. 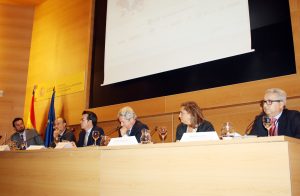 Recently it approved the Code is one of the tools included in an overall improvement gear in the food chain that includes five key elements, according to Fernando Burgaz, director general of the Food Industry at Magrama: “Identification of abusive practices, definition of a regime of sanctions and the creation of AICA to regulate it, the code of good practice that creates a second layer defining chain relationships, a system of conflict resolution and the existence of the Observatory of the food chain to identify the operation of the Code and its shortcomings or needs improvement.”

By agricultural producers, the deputy director of Cooperativas Agro-alimentarias of Spain, Agustín Herrero, said that “the code is made to meet all operators so that all responsibilities are, in particular, producers will benefit from the rules of contracts, because it will give transparency and security. Risk none “.
The director of competitiveness and sustainability of FIAB, Paloma Sanchez Pello, has said that the food industry considered that the Code has influenced three main aspects, “in the vertical practices: written contracts, claims, negotiating deadlines; horizontal practices: category management and advances in innovation; and conflict resolution”.

The CEO of ASEDAS, Ignacio Garcia Magarzo, said that “we must create a trusted environment for the Code serves to resolve conflicts. Furthermore, this standard allows us tools to retain consumers consistent with sustainable chain aspect. “For the consumer, the vice president of the Federation of Independent Users-Consumers (FUCI), Miguel Garcia Perez applaud concluded that any rules to help inform citizens of forming accurate, useful and clear. “All links in the chain agrifood value they refuse to conclude their speeches while claiming the excellent work of negotiation that has the Code of Practice. 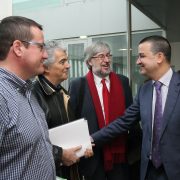 Winning in size is growing in markets, an example in Castilla-La Mancha 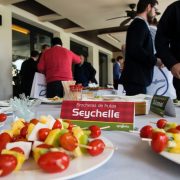 Seminar on the Code of Good Practices on Food Commercial Contracts

Seed, only essential factor for the crop production

Spain: The Commercial Code of Good Practice is already a reality