The National Center for Agricultural Training (CENCA) of San Fernando de Henares has hosted the VI edition of the Conference on Transfer and Innovation in Extensive Winter Crops organized by the Group for the Evaluation of New Varieties of Extensive Crops in Spain (GENVCE). A meeting point where farmers, students, cereal technicians and experts arrived from different parts of Spain and where, for the third year, ADAMA Agriculture Spain has been present to show the main solutions offered to professionals that are dedicated to the cultivation of winter cereal.

“We understand that the conferences organized annually by GENVCE are one of the most important forums of the cereal sector, more specialized specifically in the field of seeds and varieties.We take the opportunity to present our new portfolio of solutions in cereal,” said Enric Porta, Regional Operations Marketing of Adama Agriculture Spain in the Ebro Valley area.

As a major novelty, the farmers and technicians present have known first-hand Timeline Trio®, a postemergence herbicide for control of broadleaf and narrow leaf in wheat: “It is a broad-spectrum herbicide that has worked very well this year. It has been used somewhat later this year due to the heavy rains of March and April, but the impressions we are collecting, in regions such as Navarra, Aragón, Castilla y León, are very good in terms of efficiency and selectivity, “said Enric Porta.

Another of the references present in GENVCE 2018 has been Mirador Xtra®, a referent fungicide for the next years: “It is a product perfectly implemented that offers efficiencies well known among farmers”, said Noé Feijóo, responsible for Operational Marketing of ADAMA Agriculture Spain in the Central-North Zone. However, “the temperatures of this year, which have been rather cold, have stopped the development of fungal diseases, so far in wheat there are hardly any significant incidents, some in barley,” said Feijóo.

➡️APROSE advises certified seed as a guarantee of profitability and quality 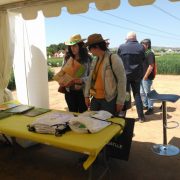 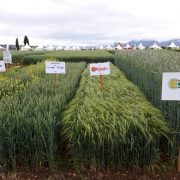 Cooperativas Agro-Alimentarias affirms that the new CAP hinders the single ...

Bayer and AVA-ASAJA organize the Sustainability Forum to analyze with the sector...
Scroll to top