The European Commissioner for Agriculture and Development, Phil Hogan made public this Monday the intention of the European Commission to continue with the plan to support the wine sector in the period 2021-2027, an “excellent news” in the words of Minister Luis Planas.

The Minister of Agriculture, Fisheries and Food, Luis Planas, reiterated Monday, before the Commissioner of Agriculture and Development, Phil Hogan, the need for the Common Agricultural Policy (CAP) for the period 2021-2027 has, at least, the same budget as in the current programming to face the new social, economic and environmental challenges.

Planas visited yesterday La Rioja, along with the European Commissioner for Agriculture and Rural Development, Phil Hogan, accompanied by the regional president, José Ignacio Ceniceros, to learn about the initiatives that are being carried out within the Rural Development Program of La Rioja 2014 -2020, as well as the reality of the Riojan agro-food sector.

He warned that 6 out of 10 Spanish farmers and ranchers are going to retire between 2020 and 2030. The national challenge, he pointed out, is to ensure that the necessary generational change takes place, in addition to achieving the progressive incorporation of women to revitalize the set the rural environment and manage to cope with depopulat.

The preservation of the environment and the fight against climate change are
others of the challenges that farmers and ranchers face and in the that the digitization of the sector, innovation and the commitment to R & D & I play a interesting paper.

The national challenge, he pointed out, is to ensure that the necessary generational change takes place.

It has valued the recent agreement between the Ministry and the autonomies to begin and the drafting of the National Strategic Plan that is “the great novelty of the next PAC” to place the objectives, needs, responses and interventions “we want to give from Spain “To support the development of the Spanish agricultural and livestock sector and place it at the forefront.

Spain has before it a task “very important” and “we will have to agree on the set of autonomous communities, organizations and the Government” to define the design of the application model for Spain.

The minister has welcomed “very positively” and as an “excellent news” the proposal of the European Commission to continue with the support plan for the wine sector in the period 2021-2027, since it is a “very important” tool since the point of view of the promotion, modernization and innovation of the sector “.

Regarding the “brexit”, Planas wanted to send a message of tranquility and has assured that there is a “perfect coordination” between the Government and the European Commission. In addition, he recalled that the Government has a contingency plan for all sectors, including the agri-food sector and fishing.

The minister at the beginning of the visit has maintained with Hogan and Ceniceros, a meeting with representatives of the agricultural sector of La Rioja. After the meeting, they went to Bodegas Corral, in Navarrete, which is one of the 5 partners of the FITODEP operating group, which has developed a system for purifying water from the washing of pesticide application equipment to prevent contamination these waters.

They have also known, in Tricio, the work carried out by the European Center for Information and Promotion of the Rural Environment (CEIP), which is an example of the Local Action Groups (LAGs) that develop LEADER rural development measures and that support entrepreneurial projects, of small infrastructures and that contribute to diversify the economy and improve the quality of life of the rural environment. 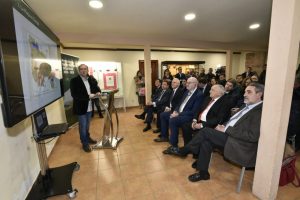 Spain allocates 9% of the entire budget of the rural development plans (PDR) to this LEADER measure, which is almost twice the minimum of 5% required by the European regulation of the European Agricultural Fund for Rural Development (EAFRD). The 17 PDR of the autonomies have programmed this measure with a public expenditure of 1,181 million euros for the period 2014-2020. The Ministry co-finances this measure in the RDPs The sector contributes 4.5% of the GDP of La Rioja, its agricultural production generates close to 600 million euros and generates 7,300 jobs. Data to which must be added the 1,968 million euros of turnover and the more than 6,900 jobs in the agri-food industry.

The wine sector has a great importance for autonomy. La Rioja is the second largest producer of red wine in Spain and the Rioja Qualified Designation of Origin is the one that produces the most wine under the umbrella of an indication of quality, with 23% in volume and 24% in value.

La Rioja receives between 15 and 17 million euros each year through the Support Program for the Spanish Wine Sector (PASVE).

Eca Fruits Magazine N.7 it is avaliable in its digital version and download...

Berlín, world capital of fruits and vegetables
Scroll to top