Simply Bricio, as well he is recognized around the world, looks at our “Oil and Lemon” section, along with his friend and traveling companion of the soul, Paco Roncero, for anticipating the ultimate gastronomic project. This is the restaurant La Canica, in San Miguel de Allende. It is located in Guanajuato, where his culinary gastronomic temple totem born: El Jardín de los Milagros. The mixture of Brice draws from its origins: air Breathe mother’s side of the Mediterranean, particularly Lebanon. It specializes in resorting to pre-Hispanic cuisine in Latin America, feels totally seduced by the Spanish, for as he says, as a slogan, cooking to excite rather than to feed.

eComercio: Your path is a risky adventure. What do you most value in your kitchen and what new projects are immersed?

Bricio Dominguez: I value my creativity, honesty in my dishes and my pantry. In San Miguel de Allende, we are going to inaugurate La Canica on December 5th. In this new project with the fashion trend, we have a very real kitchen, “very pedestrian” pedantry free kitchen without losing the essence of two great cuisines such as Paco Roncero and mine. Another project is Frida will be a handmade Mexican cuisine. 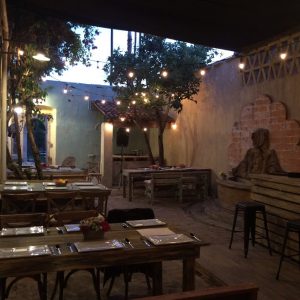 ECA: From local to global, gastronomy melts boundaries like no other discipline: Both, the European and Latin American. Exactly where recipes are inspired?

ECA: What would you highlight outstanding milestones in the evolution of Latin American cuisine for several years until today?

BD: Obviously Mexican cuisine, Peruvian, Colombian … but above all the acceptance of her in various parts of the world. Every day we are many cooks that we all strive to be more real, less fictional cuisine with original products of Latin American basket, undoubtedly, the marble is exported to anywhere in the world concept. Every day more people around the world looking to put a Latin twist in their kitchens.

ECA: In his travels to Europe, what is the last ingredient you discovered and added to his letter? How does the Spanish cuisine in your kitchen? 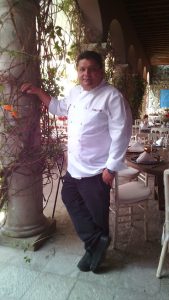 ECA: What are the raw materials with more personality in Latin American cuisines (Mexican, especially) and Spanish to develop new culinary creations?

BD: Speaking of vegetables avocado, cilantro certainly, lemon, chilies, tomatoes, corn, are a small part of what you can mention and Mexican products basket, quelites, xoconoxtle, soursop, pumpkin of Castilla, tomatillo cornfield, garambullos, chayote, and a host of products … It happens exactly the same every time I travel to Spain I love their olive oil, Iberian ham, its sausages, undoubtedly, its most symbolic product. I want to explore more is the treasure they have called ham.

ECA: We are a pioneer means their news content focuses on food and agriculture from two perspectives: the European and Latin American. Do you think that platforms like ours are necessary to bring the cuisine and culture consumers on both continents?

BD: Of course, no food without culture, and you are a perfect link between the two continents to realize what are the continuing challenges we face …