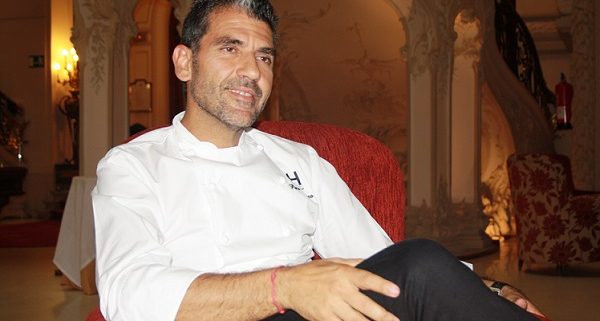 He runs the Terraza del Casino de Madrid, a privileged balcony tastefully and assault of sunshine and starry sky at night. After nearly 25 years he and his team have won three “stars” Michelin three “suns” in the Repsol Guide. Best Chef of the Year in 2006, Paco Roncero takes gimped many gallons, “they stop being nothing more than the recognition of the work of a team room, kitchen, cleaning, reception,” as he says, and all people who work with him. Live a moment of maturity and is perceived in the conversation, to blow laconic sentences, like the one speaks of the recent launch of a restaurant pedestrian cuisine in Mexico, a project in common with his friend Bricio Dominguez: La Canica.

eComercio: Your path is a risky adventure. What do you most value in your kitchen and what new projects are immersed?

Paco Roncero: What we value mostly is the maturity we have achieved as cooks, is to understand where we are and who we serve every day. Our kitchen is very simple, based mainly on raw materials. With it we seek to make people happy through knowledge of the techniques and a dash of creativity in the kitchen cutting edge.
The point of wanting to give something Sublimotion customer is a unique and different experience. Therefore, we have created a gastronomic show that there is no equal in the world, which began in Madrid in a little shop where we already played with projections, part drama, visual, sensory, … and Ibiza we have been sublime and emotional.

ECA: From local to global site, gastronomy melts boundaries like no other discipline, both the Spanish and Latin American. Exactly where recipes are inspired?

PR: Inspiration is really a very small part. The important thing is the daily work, knowledge and search for ideas for many years. When you get into the project of making a dish, you first think about what you want to do, what raw material you want to work, how you want to cook it, what will be to accompany, how textures and temperatures you want to play, among other factors. Inspiration works as an epilogue of culinary process. The rest of the dish is work.

ECA: What would you highlight outstanding milestones in the evolution of Spanish cuisine for several years until today?

PR: The most important milestone is when the Spanish chef realizes that if he wants to evolve, you must first have the resources to create a space for R & D + i. A parti here, the Spanish kitchen is changing.
Another key is the time we (the cooks) started sharing. Unlike other businesses, where everything around you is competition, we do not see it, but we share knowledge.
Innovation and sharing of ideas gastronomic use to travel together for bringing out what interests us and to make it our own. That together we have made us grow and be today, perhaps at the level of leading world number one kitchen.

ECA: When you used to travel to Latin America, which is the last ingredient you discovered and added to his letter? How does the Latin American cuisine in your kitchen?

PR: I who have had the opportunity to spend much time in Colombia, there is an impressive raw material (snorts), in vegetables, fruits, etc., but I’ve fallen in love with his ajiacos, to me that I love stews. When as a stew, “I’m having a pipe”. Knowing an arepa of egg has been a revelation. The significance of each culture is to know their roots and see how close to the village kitchen to find out the true identity of a country.
In San Miguel de Allende, Guanajuato, with my friend Bricio Dominguez Mexican chef, I just opened a new restaurant “pedestrian kitchen”, La Canica, where I have some Colombian cuisine, Spanish, Mexican, because merging external cultures makes you grow more.

ECA: What are the raw materials with more personality of Latin American and Spanish cuisines to develop new culinary creations?

PR: They walk very even. At the end, our roots are there. But it is also true that we have different cuisines. A Peruvian cuisine has nothing to do with Chile, at all with the Mexican and Colombian zero. But a good stew you can eat it in Dominican Republic, Peru or Venezuela. In Mexico, the management of spicy, these ceviches, made there or that food fortress are fantastic.

ECA: We are a pioneer means their news content focuses on food and agriculture from two perspectives: the European and Latin American. Do you think that platforms like ours are necessary to bring the cuisine and culture consumers on both continents?

PR: All draft report on the culture of a country and its chefs, especially whatever learning the different cuisines will benefit all and most importantly, will benefit the food. Joining both sides from a gastronomic point of view I think it’s great. I am very fond of Latin America. There I’ve ridden business and have the opportunity to continually travel. Congratulations and I wish a lot of luck!

Agribusiness and fresh produce, among the priorities of the Ecuadorian government...

COEXPHAL and Verdiblanca join forces to achieve the integration of persons with...
Scroll to top