Overall, some 108,800 tractors were registered across European the first six months of 2022, according to numbers sourced from national authorities. Of these registrations, 31,900 tractors had an engine power of 37kW (50 hp) and under and 76,900 of 38kW and above.

CEMA considers that 81,800 of these vehicles are agricultural tractors. The rest are made up of a variety of vehicles which are sometimes classified as tractors, which includes quad bikes, side-by-sides, telehandlers or other equipment. An overview of the total tractor registrations can be found in the annex, including an indication of the proportion of registrations in each country which can be classified as agricultural tractors.

Agricultural tractor registrations for the first semester decreased by 8.1%, compared with the opening six months of 2021. The number of machines registered in each month of the year to date has been lower than a year before. However, while the year started almost on a par with 2021 for January 2022 (-2% vs 01/21) and February 2022 (-5%), further disruptions linked to the current geopolitical situation added their impact and registrations declined more sharply in March (-7%), April (-12%), May (-5%) and June (-15%). As the first half of 2021 saw unusually strong registrations, a decline was perhaps to be expected and the number of agricultural tractors registered in the first half of 2022 was still the second highest in at least eight years.

The number of tractors registered in Europe during the first semester of 2022 would no doubt have been even higher were it not for continuing disruption to global supply chains. These are mainly due to the long-term impact of the Covid-19 pandemic but have been made worse after February 2022 due to the current geopolitical situation. These disruptions have led to both bottlenecks in the supply of raw materials and components to manufacturers and price increases for those same goods.

Additional concerns are reported over the possible impact of measures aimed at preparing Europe for potential future energy supply disruptions and high prices: these could have a very significant impact on our industry and on our supply base.

During the last months demand for tractors and other agricultural machinery in Europe remains robust, helped by strong agricultural prices which according to the global food price index published by the United Nations Food & Agriculture Organisation (UN FAO), reached unprecedented levels earlier in the year. Nevertheless, at the same time, farmers were also challenged with a similar unprecedented rise in prices for some key inputs, such as fuel, fertiliser and animal feed. With prices likely to remain volatile for some time, the future of farm incomes is highly uncertain, despite temporary derogations and support schemes proposed at European and National levels.

Registrations drop not equal across the whole tractor power range

Agricultural tractor registrations in January to June 2022 were on a par with or lower than the same months of 2021 across most of the power range, except for the smallest machines (22kW and under). The biggest falls were for machines between 23kW and 96kW; over half of tractors registered were in this power range but registrations declined by 16% between 2021 and 2022. For tractors with powers of 97kW and above, registrations were only 2% lower than a year ago.

Given the supply chain disruptions, these trends might reflect availability of machines as much as demand for them. 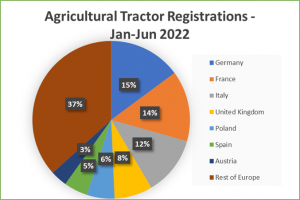 In Germany, tractor registrations in the first half of 2022 were down 7% on the same period of 2021. However, that is compared to a high base, as last year was a year of strong growth overall. The lower power classes showed the strongest growth last year and are correspondingly more clearly in the minus this year.  In contrast, there was actually a 2% increase in the power classes above 150 HP from January to June 2022, compared with the previous year.

In France, first-time tractor registrations were down -3% in the first half of 2022, compared with the same period last year. However, they are well above the average for the last five years, as 2021 was exceptional in terms of investment in agricultural equipment. After a good first quarter, new tractor registrations began to decline in April. Supply and delivery difficulties certainly had a negative impact on the volume of registrations, although it is not clear to what extent. In detail, registrations of landscape tractors continued to grow, while standard tractors and vineyard and orchard tractors were down by around 5%.

In Italy, in the first half of the year, the agricultural machinery market confirmed high sales volumes, albeit lower than the record levels reached in 2021. The registration figures indicate in fact, in the period from January to June, a 12% decline for tractors, with 11,050 units registered, a number that remains above the average of the last four years. The contraction in sales observed between January and June was not due to a drop in demand, which, on the contrary, continued to be sustained. Instead, the market downturn was mainly caused by problems in the supply chain. The sector is therefore confirmed to be in good health, although the remainder of the year could be conditioned by the variables related to the cost of raw materials and the developments in the geopolitical landscape.

In the United Kingdom, tractor registrations in the first half of 2022 were down 6% on the same period of 2021. However, strong growth was reported last year and the total for January to June 2022 was still 6% above the average for the time of year over the previous five years. These results are encouraging, given the significant challenges which manufacturers are facing due to shortages of key components and raw materials. Orders for tractors and other types of farm equipment remain very strong – the problem is getting the machines to end customers. Average delivery lead times for tractors remain over six months, while it is taking even longer to get other mobile machinery, such as harvesters, to their end user. The extended pipeline of orders means tractor registrations should remain strong for some time to come, even if orders do start to slow down.

In Spain, total tractor registrations dropped by 14% in the first half of 2022. The six-month changes by type of tractors are: -14% for standard, -19% for narrow track (NTT) and +15% for ATVs and ATUs (though this figure is even higher when accounting for units not registered as agricultural but used on farms). The price index of tractors increased by four percentage points in the first quarter, according to EUROSTAT, while imports were down 3% (>18 kw) and up 7% (total market). Therefore, the increasing number of low HP tractors used in specialty crops in Spain – which lowers the actual tractor price index and increases the total imports numbers – is directly competing with NTTs. Demand drivers are behaving negatively in recent months (high prices of energy, fertilizers and animal feed), and weather conditions during the second quarter have caused a strong decrease of crops yields which will hardly be offset by commodity prices. The general mood of farmers is down due to macroeconomic perspectives offering a difficult scenario for the market, even if agriculture drivers improve in the second half of the year.

The latest CEMA Barometer shows that general business climate index for the agricultural machinery industry in Europe has broadly continued its sideways movement at a positive level after the sharp declines in the course of the Russian war against Ukraine. In September, the index dropped back slightly to the level of June, ending up again at 13 points (on a scale of -100 to +100).

The European industry representatives have maintained their turnover outlook for the full year 2022 almost unchanged at a plus of around 5% and forecast further slight turnover growth on average for 2023, albeit only in the low single-digit range.

Price increases and bottlenecks on the supplier side continue to challenge the industry, but some slight easing is observable. Currently, 31% of the companies are planning a temporary production stop due to shortages in the coming four weeks.

The regional breakdown on the market side shows decreasing confidence levels for some, mainly larger, European markets. According to the survey participants, moreover, the need for investment in almost all end customer markets, except in Romania and Eastern Europe, seems to have become somewhat exhausted. 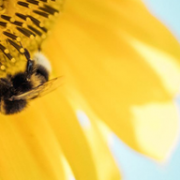 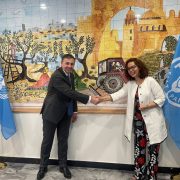 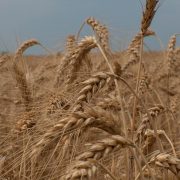 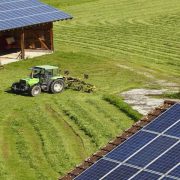 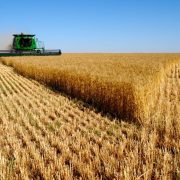 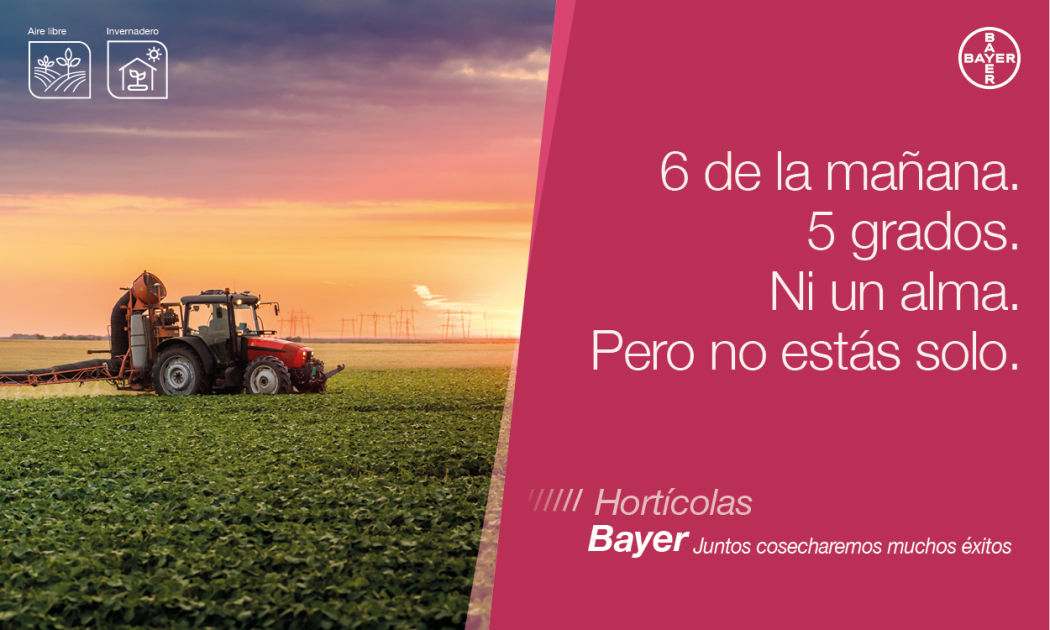 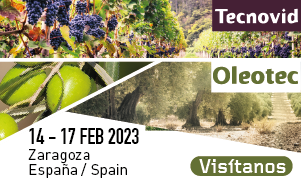