Entities such as Cajamar, Onubafruit and Compo Expert repeat as sponsors of one of the main actions of the Women Agro Project, the II Women Agro Awards, and they are joined by MSD Animal Health, in a clear commitment to the need to give visibility and contribute to the Empowerment of agro-professional women, both in the agricultural and livestock and fishing sectors. The appointment will take place on January 29, in Madrid.

Siete Agromarketing and eComercio Agrario will deliver the II Women Agro Awards next January 29, in an event that will take place at the headquarters of the National Association of Agricultural Engineers (C / General Arrando, No. 38. Madrid), and that In this edition it will be sponsored by Cajamar, Onubafruit, Compo Expert and MSD Animal Health.

The winners of these II Women Agro Awards, which will not be made public until the day of the ceremony, were selected by the Jury in an intense day of deliberation, held in Madrid last December, and whose members unanimously They highlighted the professionalism and empowerment of all applications submitted, 18 in total.

Entities such as Compo Expert, Cajamar and Onubafruit endorse with this sponsorship of the II Women Agro Awards their commitment to the Woman Agro Project, launched by Siete Agromaketing and eComercio Agrario in 2017, and which to date has developed three National Forums and two Calls for Prizes, consolidating in this way within national actions that seek maximum visibility of women farmers, helping their empowerment within the agri-food value chain.

And to them, this time MSD Animal Health is added, an entity that leads the veterinary sector offering the best products and services, ensuring quality in the food chain and the health of both our animals and society. 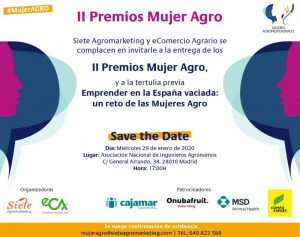 For its part, Cajamar is today one of the leading financial entities in the agri-food sector, with numerous ongoing projects specifically linked to support and visibility to the agricultural sector in general.

The Onubafruit cooperative group is the largest producer and marketer of berries in Europe, and as a leader in its sector, so is its involvement in equality. Onubafruit has already been a sponsor of the I Women Agro Awards, as well as the National Women Agro Forum, and now confirms its commitment to these actions of equality, visibility and empowerment of women in agriculture.

And Compo Expert, leader in fertilizers for professional agriculture, repeats as a sponsor of the Agro Woman Awards, framing this corporate action within its projects for equality of women in agriculture.

Prior to the delivery of the II Women Agro Awards, the gathering will take place: Undertaking in Empty Spain: a challenge for Agro Women, conducted, like the rest of the act, by the writer and journalist of El País, Luz Sánchez-Mellado, and the journalist Pablo Rodríguez Pinilla, Director of the Onda Agraria Program.

The gathering will feature speakers of recognized prestige in the field of agri-food and equality, knowledgeable about the needs of women in agriculture and the role they should and can play in the development of empty Spain. Thus, the presence of María Gafo Gómez ‐ Zamalloa, of the General Directorate of Agriculture and Rural Development of the European Commission, will be accompanied by Lourdes Zuriaga, President of APAE (Association of Agrifood Journalists of Spain), Teresa López, President of Fademur and M Ángeles Rosado, Head of Depopulation and Women in the Executive Committee of Asaja Cuenca.

Once the gathering is over, the II Women Agro Awards will be delivered, which can be followed on Social Networks through the #MujerAGRO hasthag, and which will end with a Spanish wine.

Admission is free until capacity is reached, prior registration is required: form.jotform.com/200092272327346

The jury of the Women AGRO Awards is composed of representatives of recognized entities within the agri-food sector, endorsing the seriousness and impartiality in this act of deliberation: Gissele Falcón, General Director of Seven Agromarketing, Jorge Jordana, Patron Director of the Foundation’s Agrifood Area LAFER, Victoria Moreno, Deputy Vice President of the Scientific Area – Techniques of the CSIC, Jerónima Bonafé, president of the Association of Agro-Food Cooperatives of Spain and AMCAE, Nuria Martínez, Director of the Association for the Promotion of Fruit and Vegetable Consumption “5 al Día ”, Eduardo Cotillas, Director of R&D of the Spanish Federation of Food and Beverage Industries (FIAB), Mª Jesús Villamide, Deputy Director of Practices, Employability and Internationalization of the Higher Technical School of Agronomic Engineering (University Polytechnic of Madrid) and Nuria Arribas, director General Torah of the Dairy Interprofessional Organization, Inlac.